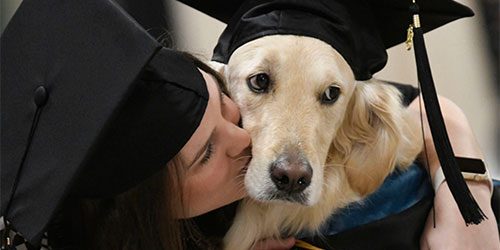 When you’re a service dog and you stay at your pet parent’s side throughout a college tenure, people notice – specifically, professors. In December, Griffin, a golden retriever, was adorned in his cap and gown to receive his honorary degree.

“I pushed for him to graduate from day one,” Griffin’s owner, Brittany Hawley, told the New York Post. “He did everything I did.”

Hawley brought Griffin to each and every class and seminar at Clarkson University in upstate New York as she worked toward her master’s in occupational therapy. Hawley, who uses a wheelchair and suffers from chronic pain, says Griffin is awesome at helping to open doors, turn on lights and fetch things at the end of her laser pointer.

Griffin also accompanied Hawley during an internship at Fort Bragg, North Carolina, where she helped soldiers with disabilities. The 25-year-old told the Post her “patients would say, ‘My therapist today is Brittany and Griffin.’”

Clarkson’s board of trustees said Griffin demonstrated “extraordinary effort, steadfast commitment and diligent dedication to the well-being and student success” of Hawley.

“I couldn’t participate in anything without him,” Hawley told the Post. “I’m so used to him being there.”