A visit from a dog can reduce the stress we experience while awaiting emergency room care according to a new study. And we can thank Murphy, the Springer Spaniel, for the evidence now being followed by science.

Patients who spent 10 minutes with this visiting therapy dog, the four-year-old Springer Spaniel named Murphy, reported they felt more comfortable, happier and less distressed while waiting for emergency room care in a hospital – if they spent time petting, cuddling or interacting with the experienced canine. 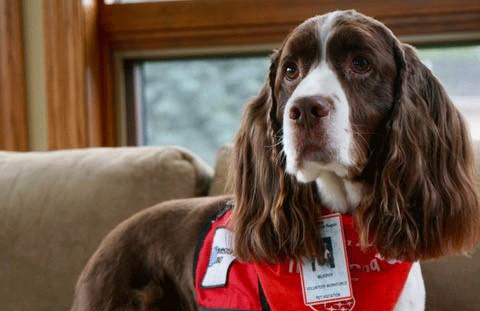 The Canada-based study, published in the Patient Experience Journal, found growing evidence that therapy or comfort dogs can be beneficial to human health and can reduce anxiety, heart rate and blood pressure. Interaction with a dog increases production of dopamine, a neurotransmitter, which reduces the stress hormone cortisol, according to researchers at the University of Saskatchewan.

“Emergency departments are hectic and confusing places. Most people waiting for treatment feel nervous, and waiting can increase their pain. It is well-known that interacting with animals can help humans feel calm and relaxed. Our study showed a noticeable improvement in the patient’s mood after interacting with a therapy dog,” said Professor Colleen Dell, a researcher at the University of Saskatchewan.

“With waiting times consistently high in emergency departments, it suggests that therapy dogs may have a broader therapeutic role to play comforting patients in distress and pain.”

Sixty-six percent of those visited by Murphy in the emergency room petted him, stroked him or cuddled him. One patient gave the dog a massage and some snuggled up to him or let the dog put his head on their chest. In almost a quarter of cases, the dog’s ‘intuition’ when interacting with a patient was noted.